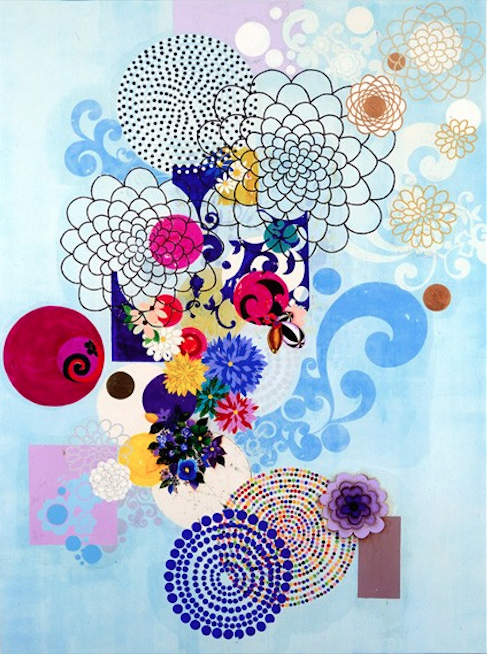 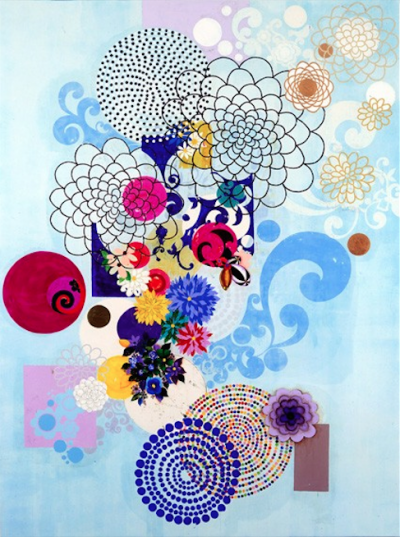 Inspired by Brazilian culture, the work of Beatriz Milhazes is made up of collages, paintings, installations and prints in different formats with vibrant colors.  Her work originates in both Latin American and European traditions, and in it one can appreciate the recurrence of arabesque motifs, ceramic details, lace and decorations that come from the aesthetics of carnival, baroque colonial architecture and music.  Her compositions are rigorous, like those of a kaleidoscope, and they interweave a multiplicity of lines and circular forms, together generating a balance that is at once harmonious and dissonant.

This assemblage of elements makes evident the influence of twentieth-century artists like Tarsila do Amaral, Henri Matisse, Vasily Kandinsky, Oswald de Andrade, and others.  For Milhazes, the surface is never peaceful; on the contrary, she tackles as a physical medium in which to play out her aesthetic conflicts.

Joá lent its title to an exhibition she presented at Stephen Friedman Gallery in 2005, which was characterized by paintings saturated with color and bearing designs that derived from motifs of flora and fauna.  The technique employed in these pieces is very close to collage, which Milhazes tends to use because it allows her to gradually construct some of the figurative elements in her compositions.  Joá is also the name of a beach in Rio de Janeiro.  She borrows it in order to give an identity to this work, which alludes to the tropical character of Brazil as well as the music and dance that identify that city’s history.