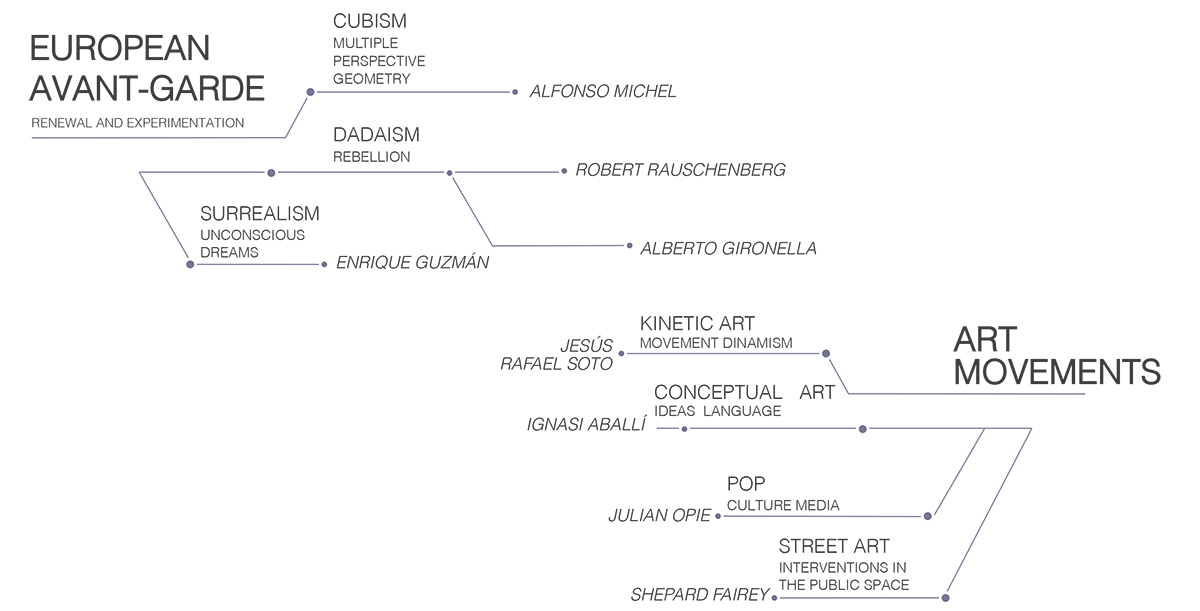 Painting has been one of the key media that have historically given form and meaning to the discourse of art and to the processes of artistic reassessments of the past.  With this in mind, Modulations surveys the pictorial content of the CIAC collection for the first time.  The selection of works seeks first to highlight painting’s dynamism, proposing dialogues between pieces coming from different eras and settings, and secondly to take note of its transformations and of the formal, generational, geographic and personal intersections it has fostered, with the aim of proposing new perspectives from which to analyze and think further about this particular medium.

In each hall one finds a chronological back and forth.  The title of the exhibition alludes to the modulations painting has undergone over the course of its history, which has been marked by debates between different approaches.  In certain time periods figuration and representation have been privileged, while in others the different forms of abstraction and even conceptual practices have predominated.  There are nevertheless interests, genres and languages that have endured despite these variations.

The exhibition alludes to these elements in each of the thematic sections that it comprises: Portraiture and Figure; Landscape; Spatial Dislocations; Scenes and Stages; Integration of the Object; Monochromy and Language; and Paint and Matter.  The first sections refer to the evolution and expansion of traditional genres within pictorial practice, while the rest address a variety of areas or lines of experimentation: the progressive change in spatial conceptions, strategies for overcoming the limits of two-dimensionality, as well as the integration of objects and other materials, or exploration through color.  The selection thus ranges from the intimacy of smaller formats to works whose large scale generates a different kind of interaction with the spectator.

The narrative of the exhibition has not been constructed as a chronological sequence or a succession of artistic movements.  On the contrary, it is meant to generate constellations of works that draw parallels between iconic modern pieces, sustaining a dialogue with languages and stances from current practices in painting.

While touring this exhibition the public is invited to consider painting from the standpoint of the present, on the basis of two circumstances: first, that painting cam no longer be regarded as an autonomous act, but must also be seen as simultaneously taking a stance toward or reflecting on painting itself; and second, that this practice is currently inscribed as an articulation of other media and formal possibilities for undertaking an artistic project.  All this is part of its constant reinvention but also its continued relevance within the discourse of art.