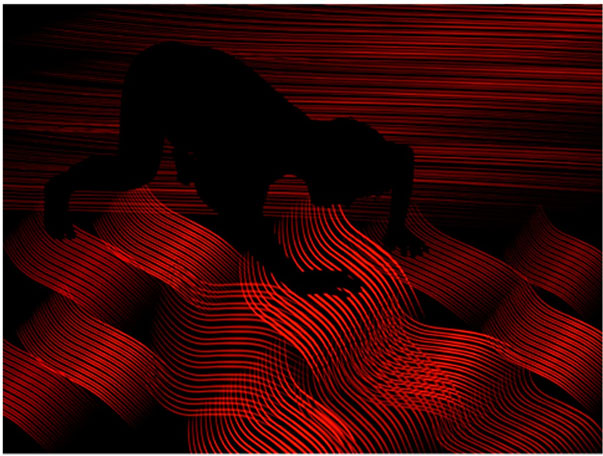 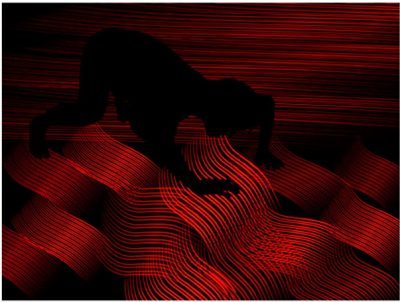 Over the course of ten years, Carlos Amorales developed an archive of images drawn from a variety of photographs from books, magazines, or web pages, which he turned into vectorial drawings through a technique similar to the rotoscoping used by early animators.  The figures that came out of this process were not identical copies of the original, but rather synthesized versions.  These drawings, which included images of trees, butterflies, wolves, birds, skulls, monkeys, spiders and different human figures, were classified by category and saved following a formal order, which was transformed into a visual vocabulary that the artist called his Liquid Archive.

Amorales played with the hybridization of the different images that made up this archive in order to create “tree-humans” or “monsters,” which are fusions between human and animal figures, which then went on to become new subcategories that could in turn be combined with other elements of the archive.  This visual glossary, with its infinite combinations, was used in paintings, animations, installations and even in performances.  Thus, the idea of the Liquid Archive represented the creation of a language with different expressive possibilities.

Broken Animal 1 belongs to a series of the same name, in which the artist uses images from the Archive.  As in other paintings from the series, the black human figure is surrounded by red lines, also generated by computer.  The black and red colors (to which others in only white would be added) are characteristic of the Liquid Archive.  These tones help to accentuate the drama and, together with the kind of figures gathered therein, reflect the artist’s interest in the dark side of the world.