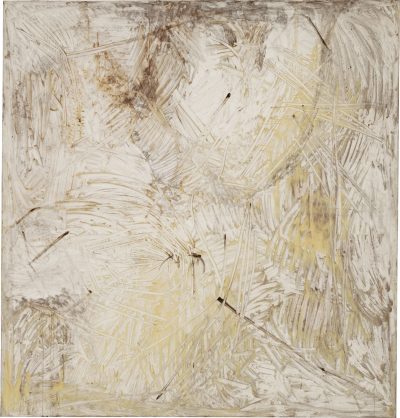 Polke’s interest in using chemical elements in his work dates back to the late 1950s, when he worked at a colored glass factory.

A decade later, when for a short time he abandoned the techniques of traditional painting to explore film and photography, his inclination for experimentation with chemical materials continued, but in the dark room.

It was thus that, in 1980, interested in the chemical effects of photosensitive elements, he incorporated into his practice for the first time rather unconventional components like arsenic, cinnabar, amber, and meteor dust, along with other kinds of lacquers and natural and artificial resins. His aim was to reinvent the processes of painting by causing the works to change by themselves, with no need of the artist’s hand.

Later, resolved to work with materials whose tones would change upon being exposed to different environmental conditions, the artist carefully reviewed his period of experimenting with photographic chemistry in order to create his series Silver Paintings, to which this piece belongs.

Some of the components with which he worked on these canvases are bromide, sulfate and silver nitrate, since each of these chemicals plays a specific role in the traditional process of analog photography. Polke exploited the photosensitivity of these materials —taking advantage of their qualities of lightening or darkening— to create abstract compositions. These paintings are the culmination of his intense period of experimentation with chemical products.