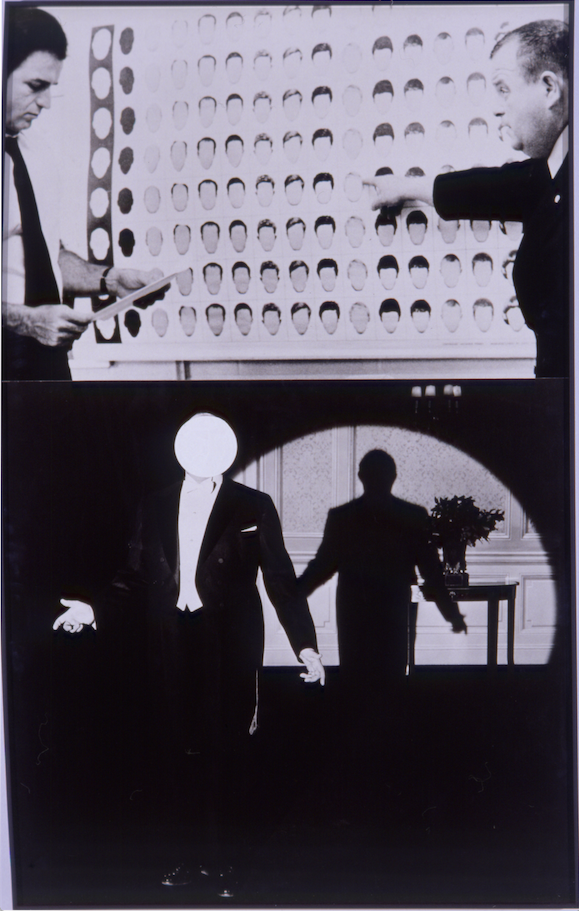 Black and white photographs with acrylic paint on board
48.4 x 30.4 in 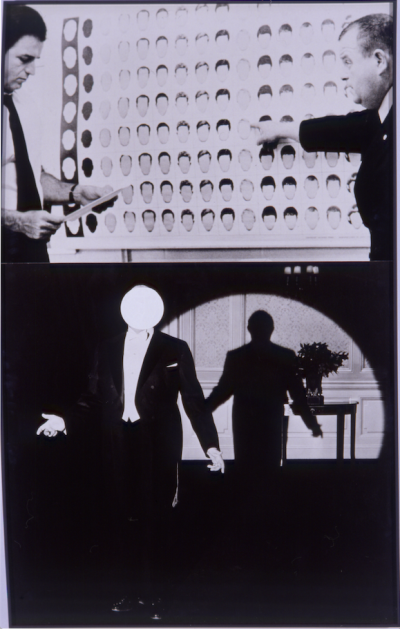 With a career spanning almost six decades, John Baldessari has succeeded in reinventing and updating his practice while always maintaining the same purpose: making evident the mechanisms that allow our minds to function.

Communication, narrative and language are the primary lines of inquiry that cross through the artist’s œuvre.  His life was also marked by these concepts, in that Baldessari had two professions for many years: artist and educator.  His work would be influenced by his experience as a professor at CalArts Institute, where he considered his students as part of one big collaboration when it came time to produce his work.  For him, teaching is always a matter of communication, and in this sense the participation of the other is fundamental.  Communication and participation are keys to solve the riddles that are presented in his paintings, which the artist himself has described as conversations in which words are replaced by images.

Baldessari alters linear narration; hence his persistent use of irregular formats and collage as a privileged technique.  He uses all kinds of images from film, television and the press as visual values that erase the boundaries between reality and fiction.

Large Object (Orange) in Water and Blue Moon and Two Faces: Three Figures; One Shadow are part of a body of work on which the artist has been working for over forty years.  In this work, the artist has arbitrarily superimposed an orange stain on the public pool shown in the photograph, and in the background he has drawn a blue circle that, as the title indicates, represents the moon.  These paintings are characterized by colorful circles that cover the faces of the people present in the collage.  Baldessari’s interest with this series is to learn how the mind of his public functions at the moment of interpreting them; how spectators decide to construct one story versus another, through spaces of indeterminacy.  Likewise, he is interested in understanding the selection processes that the mind effects during the interpretation of the piece, where some elements are selected and others are rejected.

In Two Faces: Three Figures; One Shadow Baldessari made a montage of different images, generating multiple connections between the different fragments that make it up: in the top part of the composition we see a mosaic of human typologies, like the catalogs of faces that the police use to identify suspects, and in the lower part a stage, in the manner of a theatre revue, whose main actor —with his face covered by a circle superimposed by the artist— projects his shadow.

Aside from the information the artist provides with his titles, there is no other hint about the meaning of his interventions into the images.  It is up to the spectator to come up with the possible scenarios proposed by the work.  In this way, Baldessari keeps identities and spaces a mystery, thereby making it clear that the transgression of contents can generate an uncertainty in the original meaning of the image.