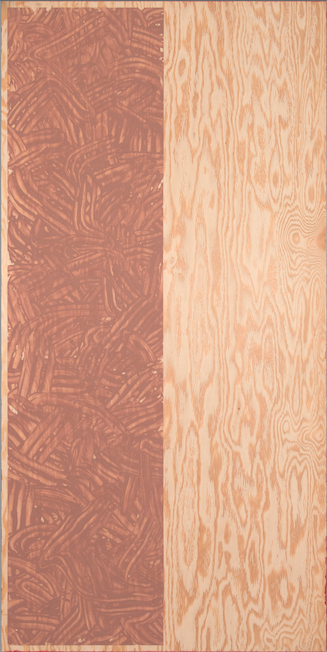 Richard Long takes up the relationship that humans have had to nature since prehistoric times. His projects begin with walks that he carries out in different parts of the world, leaving a mark in the environment or gathering materials with which to intervene in other spaces at a later date. In this way, landscape is a both a medium and the central subject of his work.

His pieces tend to be sculptures that he places outdoors, thereby allowing nature to consume them. Untitled contrasts with these works by being two-dimensional, but it nevertheless follows the main principle of Long’s works: the walk. For Untitled, the artist gathered clay on one of his walks, which he later used as a material for painting on a wood medium. By using this gathered material, he creates a record of his journey.

In his attempts to stimulate a reappraisal of our relationship to nature, Richard Long developed this series of paintings in which he used nothing but his hands to paint, making evident the ways in which humans habitually and instinctively approach their surroundings by using their bodies.