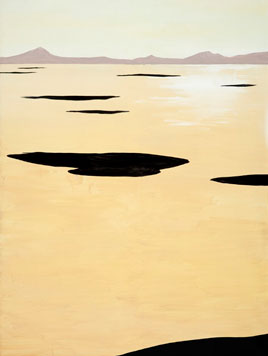 At a time when images of everyday life were no longer his main motivation, Wilhelm Sasnal delved into historical and political events of world importance, as documented by the mass media.  Petroleum belongs to a series of the same name, in which the artist was interested in petroleum as an index of contemporary economy.  In this way, the desert landscape with dunes, solar reflections and oil stains evokes associations with the oil-rich countries of the Middle East.  Likewise, Petroleum reminds us of the 2010 ecological disaster in which a massive oil spill was caused by the explosion of an oil rig in the Gulf of Mexico.

Taken almost to abstraction, Sasnal’s production becomes a filter that reflects and at the same time intervenes in the “reality” of historical photography.  “There are no rules,” Sasnal has said, “just things that intrigue me.”