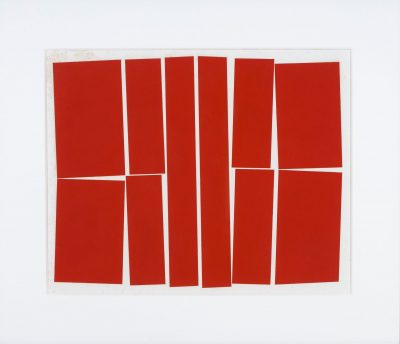 Metaesquemas is a series made up of over three-hundred-fifty gouaches on paper that Hélio Oiticica made from 1957 to 1958, in which the artist shows disparate arrangements of geometrical figures.  The atypical way in which the regular forms are laid out generates a sensation of movement and rhythm, which is emphasized by the use of color.

In an attempt to distance himself from classic principles of representation, which for him and some of his colleagues in Rio de Janeiro confined painting to the fictitious pictorial plane, the Metaesquemas can be interpreted from the standpoint of Oiticica’s growing interest in destabilizing the spatial assumptions of concrete painting, which was influenced by mathematical compositions, the ideas of Gestalt psychology, serial production and constructivist color theories.  Thus, these works by Oiticica reflect their affinity for Maurice Merleau-Ponty’s arguments about the phenomenology of perception and the relation established with the spectator.

In these pieces, Oiticica is interested in the way in which forms inhabit and interact with the space of the plane.  He wants to challenge the two-dimensionality of painting and thus destabilizes the seriality of the arrangement, seeking to bring movement into pictorial space.  After the Metaesquemas, in 1959 Oiticica definitively abandoned painting in favor of works that would invade physical space, following the ideas of Merleau-Ponty as well as those of the poet Ferreira Gullar and his Theory of the Non-Object.