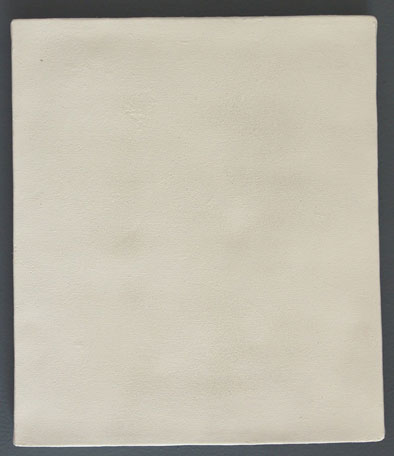 Cynthia Gutiérrez’s work is notable for constantly exploring notions of memory from different perspectives, while always seeking to identify both tensions and fissures of that which is recognized as already established.

Both reality and fiction are also present in her work, which unfolds across a variety of formats.  Their placement is generally from the standpoint of a questioning of their status.  Many of her projects derive from historical moments and in some way or another function as new readings that make evident the difficulties of apprehending history as a whole.

Lienzo [Canvas] is inspired by the work of the renowned Italian-Argentine artist Lucio Fontana (1899-1968), who questioned the limits of painting.  Fontana made incisions on the surface of his canvases, making it difficult to distinguish whether they consisted of two or three dimensions, that is, whether they were paintings as such or sculptures.  Lienzo resembles a canvas ready to be painted.  Nevertheless, it is a reproduction made in bronze and enamel.  This work thus attempts, just as Fontana did in his own day, to question how this object is not only a physical support structure of painting but also a sculpture in itself, owing to the dimensions and qualities of its manufacture.