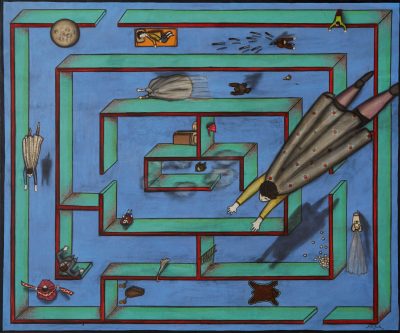 Julio Galán’s paintings are dreamlike, cryptic and self-referential.  He mainly used oil paint, incorporating elements from thoroughly disparate contexts: Russian iconography (present in his earliest pieces), Mexican popular culture, religious symbols and kitschy atmospheres, as well as other ingredients that are repeated over and over, like the bears, knives and mummies that refer to the artist’s childhood dreams.  All these components create an indecipherable universe that people have occasionally tried to understand by way of recourse to disciplines like psychoanalysis.  There are, however, no concrete answers, only interpretations.

The artist saw his paintings as reflections of himself, and in them he repetitively represented elements linked to his personal history.  The bears, for example, have to do with his childhood, most of which was spent on his grandfather’s ranch in Múzquiz, Coahuila, home to one of the biggest preserves for these animals.  In Laberinto azul [Blue Labyrinth] he paints them running, which shows, in turn, another of the resources that the painter frequently used: figures in motion, moving rapidly.  Likewise, in this work there are other elements from his creative world, like labyrinths, staircases that lead nowhere, and bodies in chains, which have been interpreted as metaphors for universes from which there is no way out.

Each component is there for a reason, lending a meaning that seems hidden, like the kind that thrives in the unconscious.  Pieces like Laberinto azul are, as the artist has said, emotionally and existentially charged self-portraits.