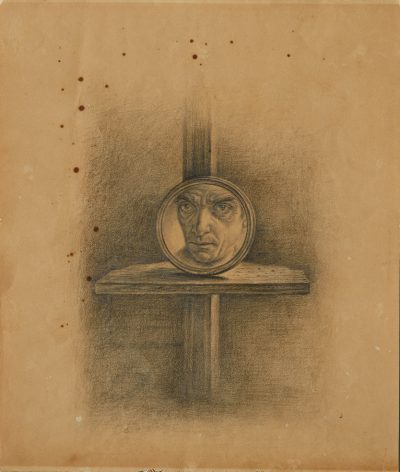 Julio Castellanos’s path crossed those of painters and movements that marked the course of the visual arts in Mexico.  In 1918 he began his studies at the Academia de San Carlos and would later continue under the tutelage of teachers like Saturnino Herrán and Leandro Izaguirre.  He was also linked to the groups known as Los Contemporáneos and Los Estridentistas, and he participated in the Escuelas de Pintura al Aire Libre.  Nevertheless, the biggest influence on his vocabulary likely came from Manuel Rodríguez Lozano, with whom he was also romantically linked.  Castellanos painted oils and al fresco murals, made lithographs and drawings, and dabbled in set design for the theater.

This self-portrait is a preparatory drawing for one of the most representative pieces of Castellanos’s œuvre.  The painter died in July 1947, the same month when various scholars have identified the completion of this painting.  Unlike his other self-portraits, this one ventures into symbolism: Castellanos detaches himself from the corporeal and only paints his face on a support that, according to Justino Fernández, would seem to be a mixture between a cross and an easel.