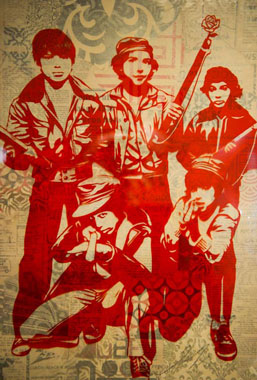 Appropriating images is one of the visual strategies that characterize the work of Shepard Fairey, an artist and graphic designer who comes from the subculture of skateboarding and street art, and who is interested in creating works that respond to the social and political reality of the present moment.  Solid colors, the aesthetics of stenciling and graphic art features are some of the elements he uses to bring life to pieces in which characters from popular culture or politics become contemporary icons through which he poses questions about themes like war, government and the environment.

Defiant Youth comes from this group of works.  To make it, Fairey appropriated a photograph taken by Martha Cooper, a photojournalist who documented New York City’s graffiti culture in the 1980s.  Showing a group of armed adolescents on the offensive, the image recalls the armed forces and questions the influence of war and violence on everyday life.  Fairey altered the original photo by eliminating some of the figures in it and transferred it to a canvas by way of a stencil and silkscreen.  The image was later used by the artist for a mural and an edition of posters.