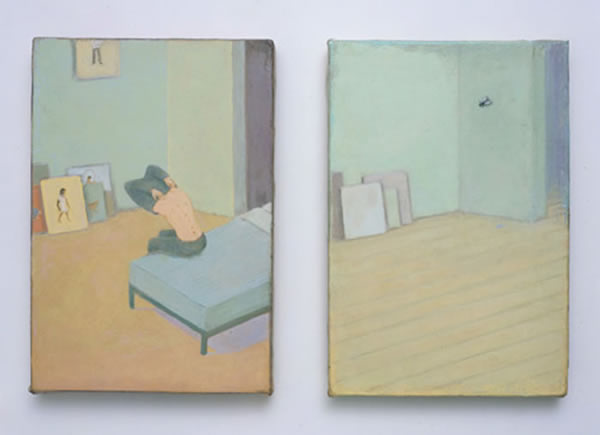 Francis Alÿs came to southern Mexico in 1986 to work as an architect as part of an NGO.  Years later he began developing his artistic practice out of a desire to understand and translate the social and cultural codes of his new place of residence.  Limiting his territory of action, he reduced the megalopolis to his immediate surroundings: the historical center of Mexico City.  Alÿs made the streets his main field of work, seeing public space as providing an opportunity to make a social and political impact.  His pieces are displayed in such formats as video, performance, drawing and painting, always with an analytic character that occasionally feeds on humor and utopia.

El Profeta y la Mosca [The Prophet and the Fly] was an exhibition designed by Alÿs himself and dedicated to paintings and drawings that, like pieces such as D- El Jersey y La Mosca, are naïve-looking exercises through which he reflects on the role of the artist.  These works make evident how any event, no matter how insignificant it might seem, can be a catalyst for reflection, analysis and metaphor.  Paintings like these, with a popular look to them, set aside the guidelines of academic aesthetics and represent space in a more intuitive way.  The man, who also appears in other work by Alÿs, is a sort of alter ego for the artist.  We see him in his bedroom, with his works of art, engaging in a gesture that can be as mundane as taking off (or putting on) a shirt.